“Creux de l’enfer”, once a well-known knives factory, has been revitalized thanks to art. The 19th Century building, located in Thiers, today serves as a platform for contemporary artists. A myth following the history of the building fits perfectly with the artistic concepts unveiled through different exhibitions.

Back in 1988, the “Creux de l’Enfer”, meaning “Hell’s Hollow” became a Center of Contemporary Art. In 1986, Georges Trakas, a sculptor born in Quebec City – many of his projects are site-specific installations and he describes himself as an environmental sculptor- became the first artist to express interest to show his work in the former knives factory. Many artists followed his lead, contributing in development of the art center.

In an essay entitled “Memory of a site, memory of an Art Center”, the former director of Center of Contemporary Art in Thiers, Frédéric Bougle, writes that “The Creux de l’Enfer” factory, was burnt down on several occasions and always at dusk as though to confirm the imagination of ordinary people clouded in sulphuric gases. It is said that a woman and child once threw themselves into the thundering torrent in order to escape the licking flames.

“Other social realities, no less cruel, have been added to the blackness of the myth. In the middle of the nineteenth century country blacksmiths, poor indebted craftsmen were brought into the factories set up all down the Durolle valley. These unsuspecting people discovered a hellish universe”, explains Bougle through his essay. The Center currently is run by Sophie Auger Grappin.

In a cold November day, the doors of the building are open for those who want to visit the current exhibition, “Le génie du lieu” (The Genius’s Place). It shows six works, of seven contemporary artists. The exhibition’s theme is dedicated to the building itself. 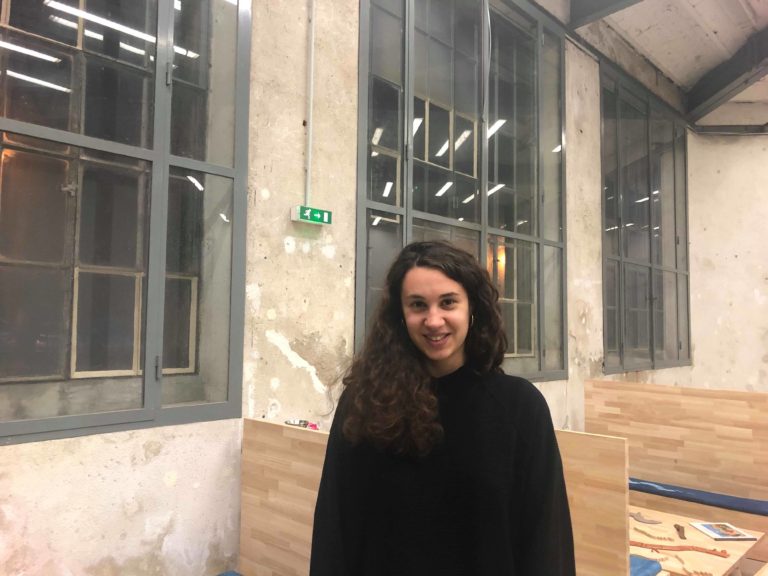 “The theme of this exhibition is related with this place. All the artist created something new and dedicated the pieces to this place, especially for this exhibition”, tells Marine Castille, communication officer of the Center of Contemporary Art.

The first artwork is made by Hélène Bertin.  A large table crossed by wooden sticks surmounted by a filter cloth printed with plants takes the appearance of a kiosk. Few chairs, tables and hangers for clothes, all carved on wood. That corner is a warm environment where a visitor can sit to have a drink, read, paint or where children can play. It invites visitors to slow down and take their time to observe the place.

In the first floor of the building, is also shown a work of Elsa Werth. She gave a rug to the place. Using the cracks on the ground of concrete slab, Elsa made a rug using triangle forms draw with a chalk. While she used horizontal lines, the other artist, Jennifer Caubet, did the opposite. She used metal spears in vertical lines and combined metal with glass. The pieces of glass that she used for the artwork were produced as part of a production residency at Cirva, a Center for Contemporary Art and Glass Research. The arrangement of this piece unveils a galaxy, a cosmos, planets: a part of our space. 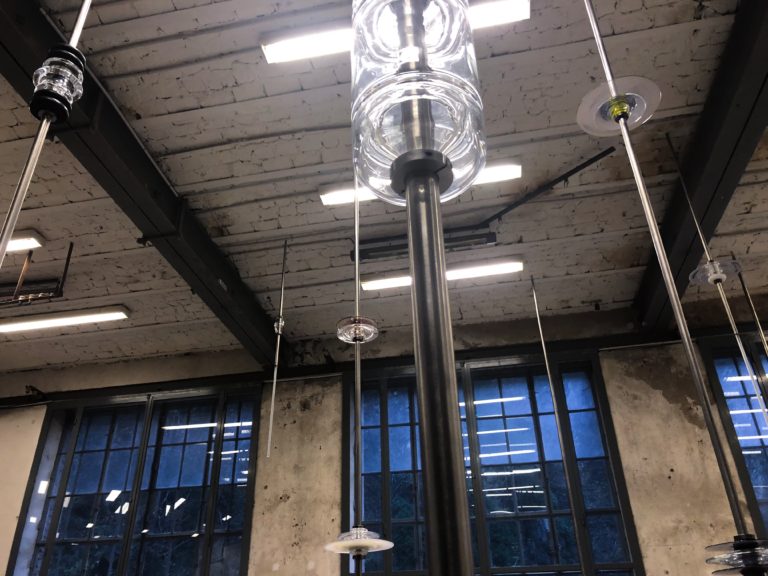 Sylvain Grout and Yann Mazéas who have been working together since 1990, haven’t gone that far.  Their video-installation was filmed around the forest nearby the art center. It shows local people picking mushrooms and mixed atmosphere around a campfire, haunted by the performance of Iron Man- Nicolas Fenouillat- who plays drums in accompanied by Anne Lise Foy singing Donovan’s songs.

In the second floor of the building, the landscape of environment surrounding “Le Creux de l’Enfer” has been transferred inside the Center. Working with large brushes and pigments of colors, Flora Moscovici, has blurred boundaries between interior and exterior of the building. Aware of the intense between building and nature – through the shades of rocks, glowing foliage and multiple shades of cascading water – the artist opens a new perspective.

The founds for the exhibitions are usually provide by public institutions.

“This center of contemporary art is an independent institution but it also has support from municipality and also from the government”, tells Marine.

She says that Center of Contemporary Art displays works of artists coming from different countries, but mostly from France. The audience response well to their exhibitions.

“The people here are interested on art. We work a lot with children from schools of Thiers. They come here to see xhibitions and this is a really good thing. Most of our visitors are from Thiers. We are also planning events like concerts and workshops with different artists. By doing good events we will bring more people together. The fact that this is the only center of contemporary art around here emphasizes its important”, says Marine. 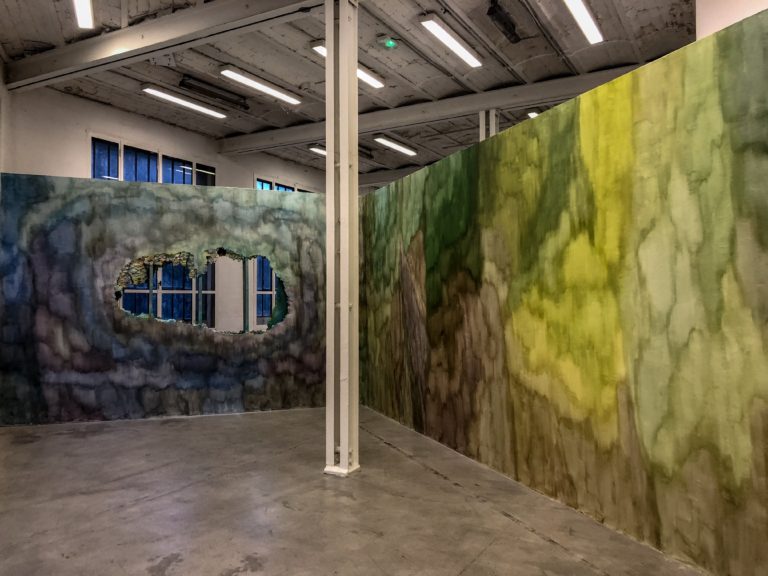 From outside, in the left side, myth behind the old building, intrigues visitors, through a big format drawing of devil. As legend says, the first devil depicted at the “Creux de l’Enfer” is thought to have been painted on a simple canvas and fixed against the wall of the factory like a banner or sign. He had the usual attributes of a devil: horns, claw-like hands and a twisting forked tail.

“A great deal of energy and well-organized young talent, with the firm and combined support of our partners, including the Fondation de France, with its programme of ‘Nouveaux Commanditaires’ have all helped the ‘Creux de l’Enfer’ in its international renown. As each year passes, from Moscow to New York, the Creux de l’Enfer has left its mark. In thirteen years, it has become the ambassador of Thiers”, writes Frédéric Bougle. Its mission still continues. 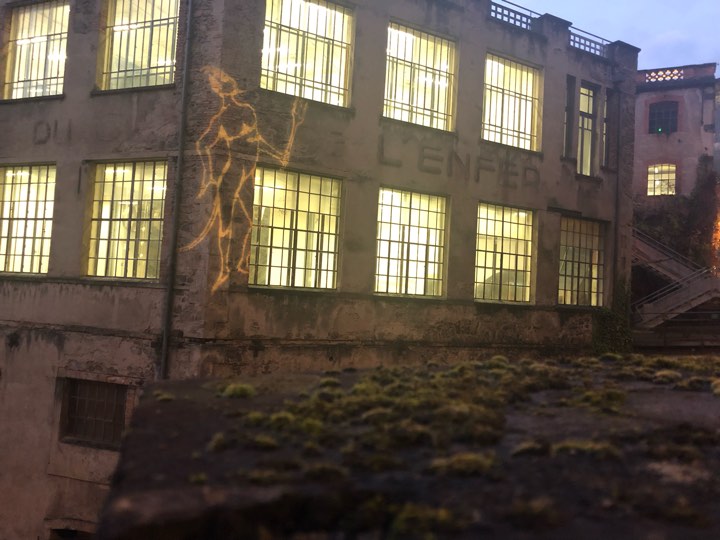