Lyon, know as the capital of gastronomy largely to the “Mères” (Mothers) has changed during the years but what you will still find there is the passion for food that has been passed through generations.

“Lyonnais mothers”, middle-class women, former house cookers who left their homes after France Revolution, having lost their jobs for economic reasons in the period between the wars, started working for themselves. They started preparing popular, simple meals for the canuts, silk weaving workers. What they had in common was a refined cuisine using simple local ingredients. Initially frequented by workers, including those in silk industry, their restaurants soon attracted businessmen and dignitaries. Later on they inspired many great chefs. Among them was Mere Eugenie Brazier, the first woman to get three stars from Michelin in 1933 for her restaurant & bistro. She trained the young Paul Bocuse, who would be called later the ‘Pope of French Cuisine’ and ‘The Lion of the Lyon’. 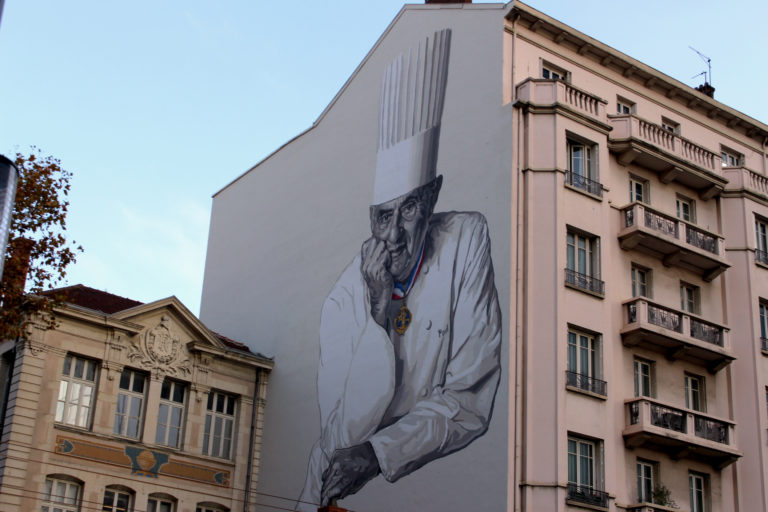 “The biggest challenge is to always stay the same”, says Chef Gilles Reinhardt, who works at L’Auberge du Pont de Collonges, often just called « Paul Bocuse Restaurant”. For him every food is delicious when it’s well cooked, and of course the ingredients have an important role on its cooking, especially since he is working in a restaurant which follows Paul Bocuse legacy. “We want to stick to the roots. We have fallowed Paul Bocuse for years and we don’t want to betray him, so we are here working for his name”, says the chef who considers himself as a temple guardian trying to keep the masterpieces like: Soupe ause truffles, rouget en ecailles de pomes de terre, volaille de Bresse or Loue en croute, still in the menus. 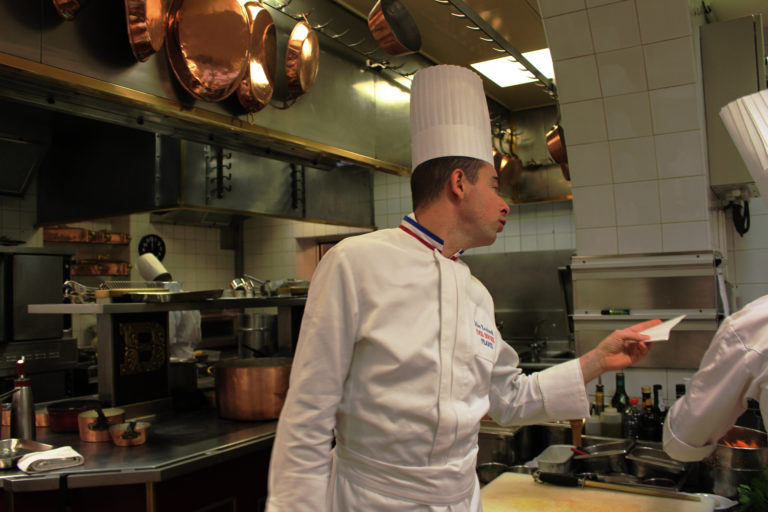 At 9:00 am in his kitchen, everything is perfectly set. ”Yes chef, Yes chef” resound inside the kitchen run by Reinhardt. He used to wear his chef costume when he was 6 years old, helping his mom in the kitchen to prepare food, back than not even being aware that he is exploring his lifetime passion.

“Gastronomy for me means eating well. Nowadays in most of the modern restaurants there is sort of minimalism in gastronomy. I don’t want to eat fifteen small little dishes. To me, gastronomy is generosity, quality food, a good way of cooking, putting the right amount of spices and sharing the food with others”, says chef Gilles Reinhardt.

He says that for him, is really important to explore other countries, to travel, gain new experiences, new ideas and learn specialties from other different cultures. And he also thinks that a cooker should have a great sense of taste. 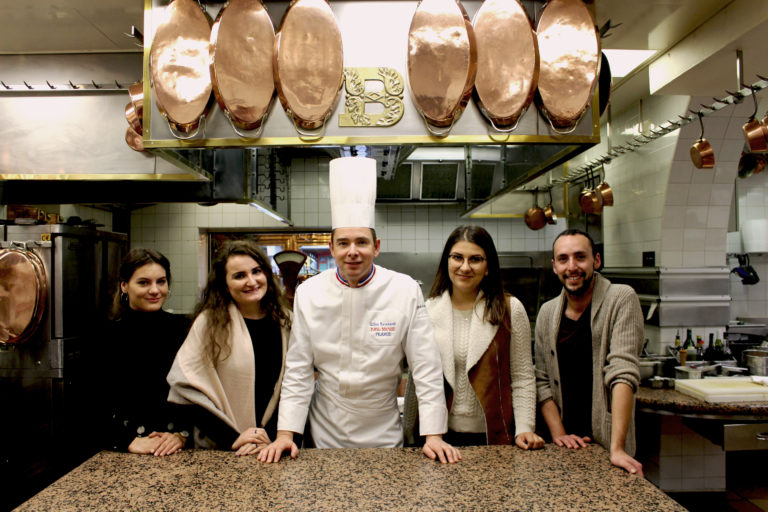 The antiquity, class and warmth are the qualities that clients will find in this restaurant. Even 20 years later they will get the same feeling that they had the first time they have eaten there. Through the restaurant walls can be find photos and paintings that display the restaurant’s evolution. There are also pictures of Paul Bocuse, his team, personalities who have made a mark on their time, winners of the Bocuse d’Or, and some of the icons of French cuisine. 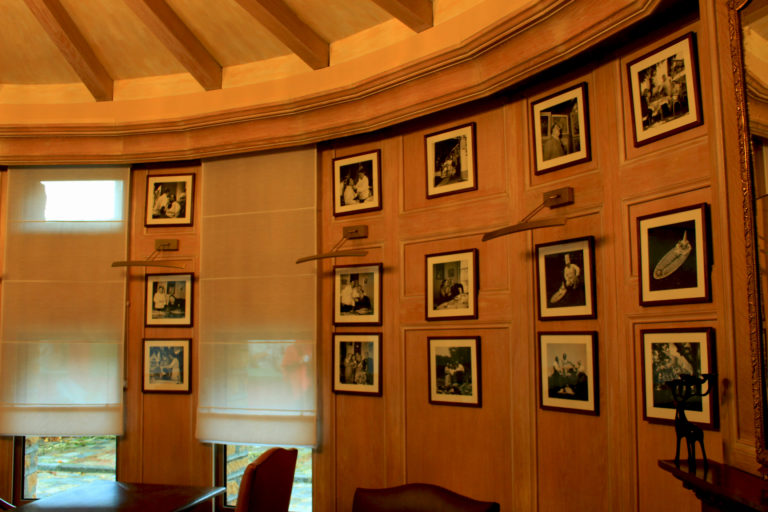 “The truth comes from the bottom of the pot”, are Paul Bocuse words that Jean Philippe Merlin, maître d’hôtel quotes. For him the main point is to pass the tradition to the young generations because if that doesn’t happen, the tradition will vanish.

“First challenge is to keep the Paul Bocuse’s spirit because we have three Michelin stars for 53 years and we want to keep them as much as possible. While, the second challenge is to make clients come back here exited and feeling happier after they leave the restaurant, because they should have incredible moments here”, says Merlin. 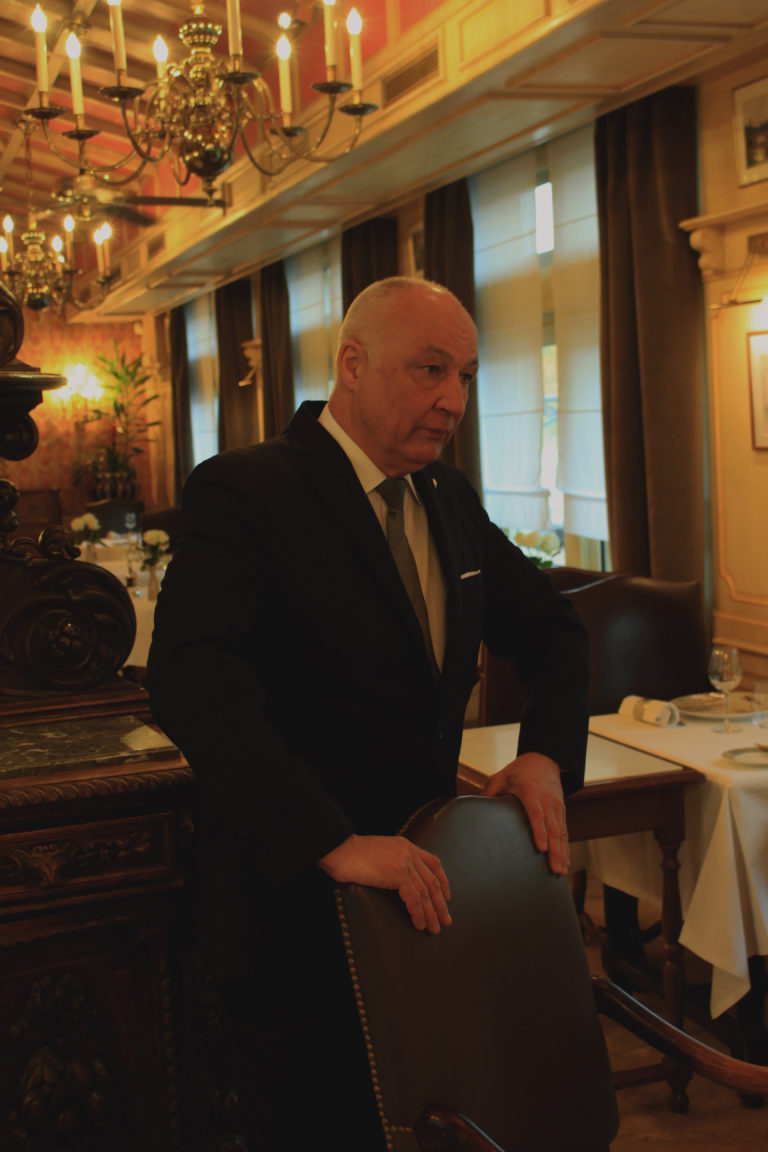 Since 2010, the French gastronomic meal and its rituals have been recognized as an intangible UNESCO cultural heritage. That’s the reason that gastronomy in France does not represent only the relations between food and culture. You can see that it is so much more if you go inside the Paul Bocuse Institute, one of the leading higher education and research institutions with an international presence.

Institute Paul Bocuse is presided by two exceptional men: Paul Bocuse, founder of the school in 1990, and Gérard Pélisson, Chairman of the Board of Directors since 1998. In the entrance of the building, there are statues of both of them. A part of the Institute building is located inside the castle of Vivier from the 19-th century and is link with the other part through a bridge. 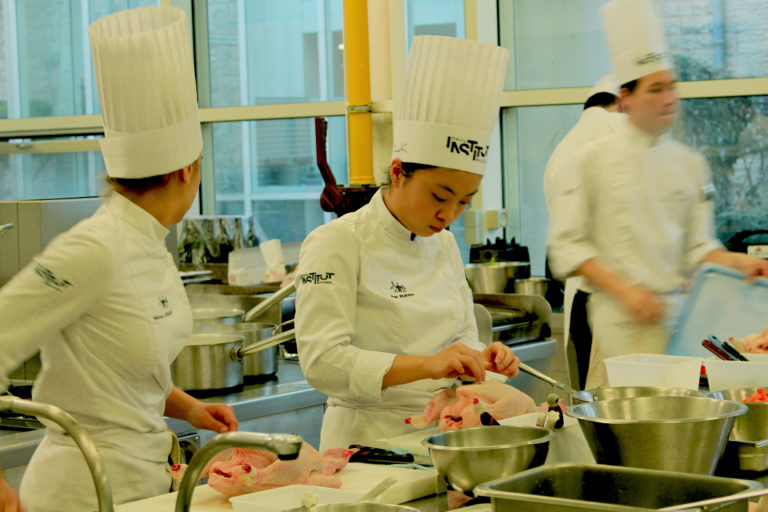 The Institute welcomes 1000 students from 50 countries distributed on 6 international campuses. 50 % of them are French student and 50 % are international students. Also the Institute is known for equal quota by having 50% men and 50% women. The idea behind building this institute was to promote French food and to make France known worldwide for the gastronomy.

“We want our students to find they own path while keeping food and culture together but also looking forward to the future. In the first years they learn the basic things and after they can make their own compositions because they are not clones they have to do what they want and in the way they want” says chef Jean Philippon. 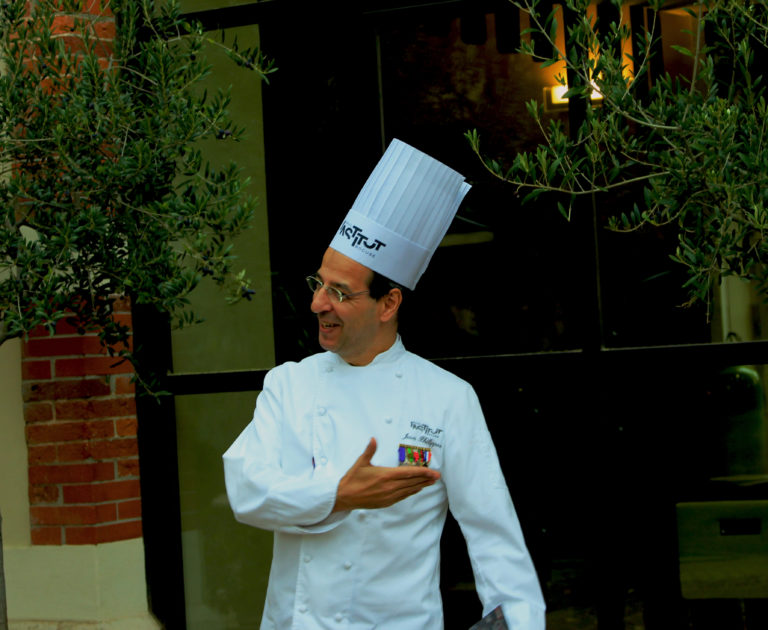 In France each region has its own culinary specialties and that is something special. Lyon’s specialty is Cervelle de Canut, a cardoon gratin or a good chicken from Bresse. A best place to try food from different regions of France while being in Lyon would be the Paul Bocuse covered market, only five minutes walking from Part Dieu central station. The origin of the market goes back at 1859 when it was built so that the farmers and ranchers of the area could sell their products more conveniently. In 2006 this market, was named after Bocuse.

Chef Philippe Lechat from the Atelier de cuisine, has got himself a workshop 10 years ago, inside the “Les Halles de Lyon Paul Bocuse”. There he gives lessons on cooking. To him, teaching means giving positive waves and working with different original ingredients of the seasons. 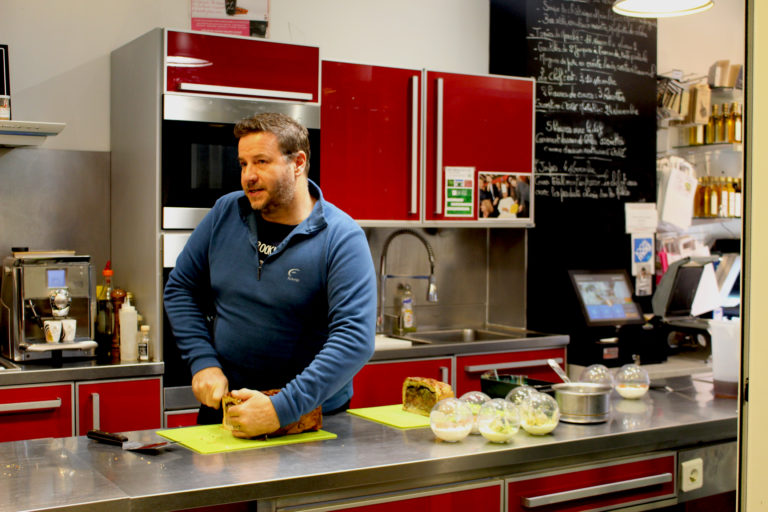 “Gastronomy will evolve and maybe will continue to contradict herself. What is important is to continue keeping the taste and we are working with the architecture of the plate by mixing different tastes, colors, mixing fruits and herbs, and sometimes different kinds of oil, different fragrances with vegetable style or cracking oil. But the most important is to stick to the taste. In France we love delicious taste. We don’t like to have beautiful plates in front of us, which have no taste at all”, says Lechat. While addressing to the young chef Mathias Barrial, he says that when he is cooking ”Blanquette de veau” it must be the same taste or when cooking “Bouillabaisse” it must have the taste of wild fish. For him this is the aim of teaching, promoting the traditional taste. 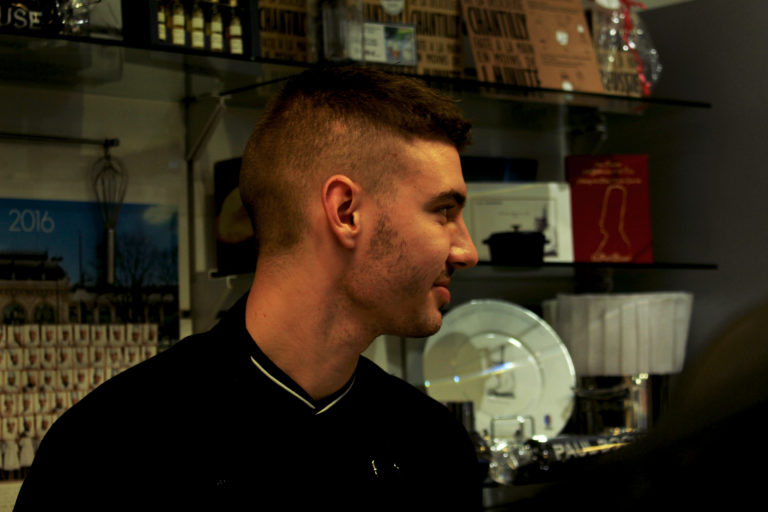 Paul Bocuse market is a place where can be find high quality products. Before, it was a place where you would find the most well known chefs. Back than, around 10 o’clock they would all meet and have coffee and breakfast together.

Jean-Francois Mesplede a journalist of gastronomy – who wrote some books and guides and at the end of his career was named the head of Michelin Guide in France and also was the director of the Michelin Guide for five – says that gastronomy continues to be the most important thing for people in Lyon. 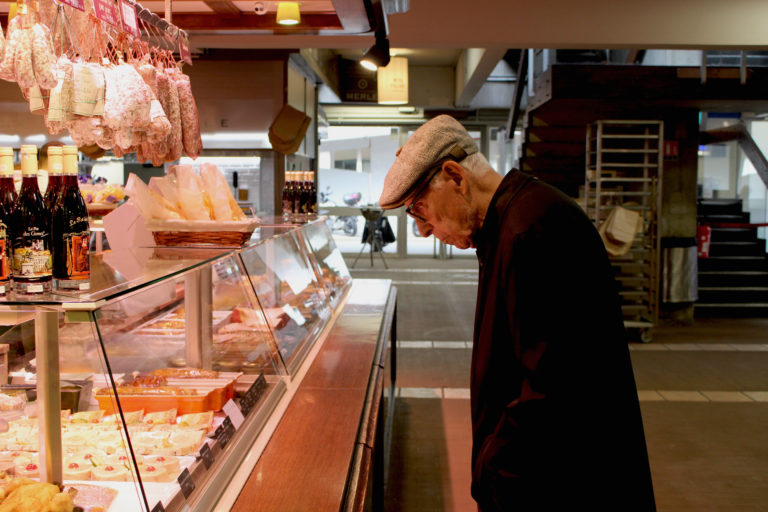 “In Lyon gastronomy in general is very powerful and has a special role. The Lyonnais people like eating and going to restaurants all the time. Lyon is well placed geographically because we are surrounded by vineyards, the meats of the “Charolais”, the fishes and the rivers. In Lyon, you can eat delicious meal everywhere”, says Mr. Mesplede. To him, something that remained same in French gastronomy is the approach to the ingredients.

Lyon gives a rich offer to the visitors. One of the best ways is starting the day with a strong coffee and a « pain aux raisins ». The food in here fits perfectly with the season. In autumn, one of the best choices is a cup of delicious soup of pumpkin, made by Chef Gilles Reinhardt. 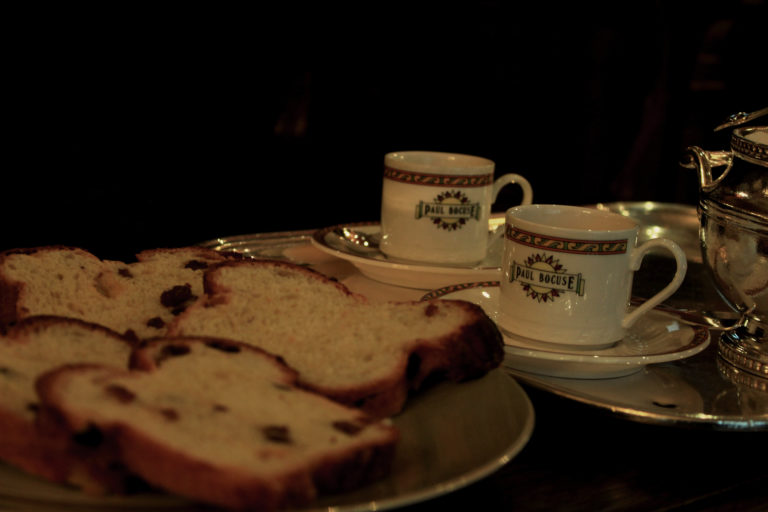